A downloadable game for macOS

This game has been made using Aloan Moreiraís 2600 engine.
I did not use the MP3 sound effects, however.

STORY
For 60 years, the Dark Sun Empire ruled many nation with an iron fist.  It became more and more, both cruel and inhuman.  One day, the emperior demanded that all of the young women and girls were to be taken from their homes, and brought to his palace.  They would be made to live in his harem.  But, the great hero, Daynoto, led a rebellion that brought the empire to ruin.  With his keen intelligence, and great cunning, he and his men were able to poison the emperior.  They were also able to slay his generals.  From within the shadows, both Daynoto and his large group of loyal men, took out the key people who enabled the empire to function.  They used many other tactics which put to end to the empire.  Within 20 years, he destroyed the Dark Sun Empire and freed all of the nations that it once ruled.  But Gorath was the court mage of the emperior.  Even he, with all of his skill, could not save his emperior or the empire.  The evil wizard was so filled with rage and disgust over losing the empire, he decided that since the emperior could not have all of the young women and girls of all of the lands, then they could not have their lives!  He would use great black magic that would turn all maidens to stone.

The object of the game is to kill the evil wizard Gorath.  He has stolen a magic staff of great power and made his way into the heart of a castle.  He plans to use the staff in a very foul ritual that will turn all maidens to stone.

When you see the title screen, press the <SHIFT> key to start the game.  Press the <ESC> key, anytime, to end the game.

The upper left corner of the screen shows your status.  The row of black circles indicates your life and strength.  Getting hit by enemies or fireballs reduces your strength.  If you lose it all, you will die.  Just below your life indicator, is the indicator for the number of arrows you have.  You will start the game with just one unit of strength and no arrows.  You gain both strength and arrows ONLY by the PASSING OF TIME.  Your magic bow produces arrows of light.

Move by using the arrow keys.  Move past the edge of the screen to reach more of the forest or castle.  Use the <SHIFT> key to fire your arrows.

In order to fire your arrows:
1. you must have at least one
2. you NOT be moving
3. you must face either right or left
If you have at least one arrow and you are NOT moving but you are unable to fire any arrowsÖ..move just a bit to the right or left, without moving up nor down.  This should cause your facing direction to be either straight to the right, or straight to the left.

Just below both your strength and arrows indicators is a row of 3 slots.  This shows how many scepters you have collected.  As you collect them, the slots get filled.

Once inside, there will be 8 scepters that you can collect.  These scepters will make it possible to destroy 3 more barriers that block you way into the heart of the castle.  However, all but 3 of the scepters will kill you if you touch them.  You must collect only those 3 scepters that are safe to touch.  There is a room that is very close to you when you FIRST ENTER the castle.  This special room will show you a simple map of the castle and clues as to which of the 3 scepters are the safe ones to collect.

Once you are in the very heart of the castle, the wizard will be guarded by 3 final barriers.  You must find their generators and destroy them.  After that, just find him and put an arrow is his vile, black heart!

In order to download this game you must purchase it at or above the minimum price of $1 USD. You will get access to the following files: 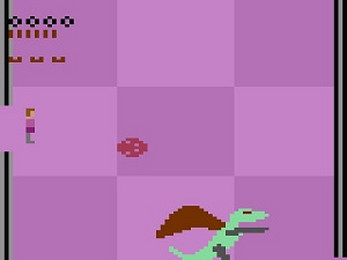 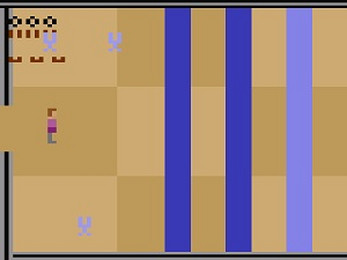 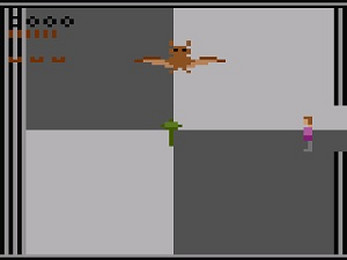